The largest island of the Mediterranean is simply fascinating.
Separated from the Italian peninsula by the strait of Messina, it seems to have a bit of everything, from important mountain ranges - Peloritani, Nebrodi, Madonie, Iblei – to a wonderful coastline and a group of satellite islets such as the Eolie, Lipari, Ustica, Egadi. the isle of Pantelleria and the Pelagie.
Palermo, the capital, is also one of Italy's most authentic and down to earth cities, not as conspicuous as Rome or Florence, but more than a match for them in the friendliness stakes.
Then, of course, there’s Mount Etna, rising in the centre of a volcanic area of Sicily, the highest active volcano in Europe. 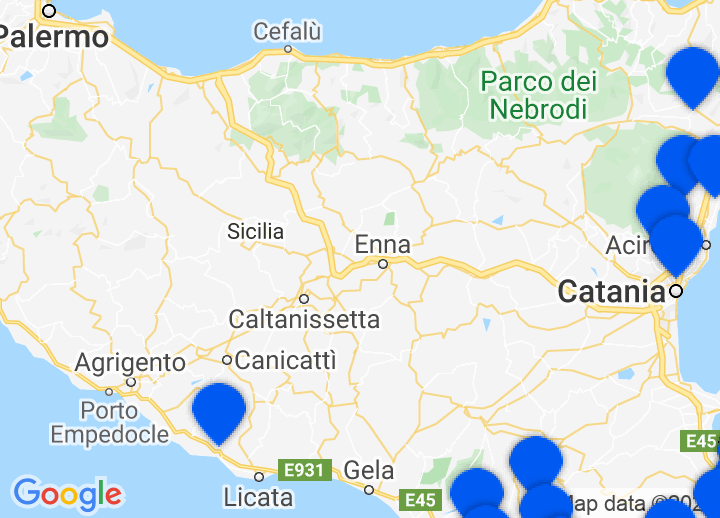 Choose from our romantic and boutique Sicily hotels and accommodation by clicking on the map or list on the right. These will highlight a wide selection of Sicily hotels, villas including romantic Palermo hotels, Taormina Inns, charming bed & breakfasts, seaside hotels amongst others. Whatever your taste, we’ll help you find that perfect getaway.

On Sicily there's a lot to discover!
If you love the nature, you should definitely explore the volcano Etna!
In Taormina you'll feel the Sicilian culture with all the palaces, churches and the antique theatre.
Trekking, cycling, horse riding and golf are the opportunities for sporty people! If you want even more action, you can book a helicopter fly or try paragliding.
On the sea, there are boats and water sports waiting for you!

Pasta, pesce e paticceria (noodles, fish and pastries), that defines Sicily!
First, you'll get different Antipasti like Arancini (fired rice balls) and vegetables in oil.
For noodle meals, they often use macaroni and you'll find Pasta alla Norma (aubergines, tomatoes and goat cheese) everywhere!
The second plate normally includes fish or a meat roll.
Finally, you can enjoy Cassata (a layer cake with ricotta and fruits) or try one of the different Italian ice creams!