The old frontier land of Castilla y Leon has perhaps done more than any other region to shape the course of modern Spain. Following the Christian reconquest it emerged as the most powerful Kingdom in the country, its domination being underpinned by a combination of military prowess and series of marriage alliances.
The very idiom of Castilla evolved to become the unifying language of Spain, whilst its political, historical and cultural importance left behind a fabulous legacy of great cities and monuments - not least the historic towns of Salamanca and Léon.
The pilgrims’ route to Santiago de Compostela, which passes through Burgos, Palencia and Léon, further bequeathed a rich harvest of Romanesque churches, Gothic cathedrals and monasteries, many of which remain in a perfect state. This land of soldiers, heroes and castles offers rich pickings for those interested in culture, history and architecture.
In short, the birthplace of El Cid is very much alive.

Notwithstanding some of the more nondescript smaller towns and villages, much of Castilla y Léon is an architectural and historical tour de force. Time should certainly be made to visit the great cities of Salamanca and Léon, as well as other towns such as Burgos.
All have an impressive array of cathedrals and architecture, while imposing castles can also be found at Berlenga de Duero and Gormaz.
The region is not just about its architecture and medieval history, however. Though being located on the “meseta”, with a relatively monotonous landscape, Castilla-Leon does offer up natural parks and kilometres of practically virgin nature, with woods and cork-oaks.
Interesting scenery can be found at the Las Batuecas valley and the Sierra de Urbíon where the majestic Duero river starts off its eventful journey that ends up in the port wine district of Portugal.

The distinguished cuisine of Castilla y Leon is notable for its excellent meat, particularly lamb, and vegetables, such as the famous creamy beans of Avila. In truth, however, the cheeses, hams and trout fished from the Leonese rivers all enjoy great popularity, though they are little known to the outside world.
A few examples of some typical and tasty dishes include the Maragato stew, la cachelada (potatoes with ham and chorizo sausage), as well as typical meat and fish pies called empanadas. Other representative cuisine includes roast lamb and kid goat from Astorga, fruits in syrup from El Bierzo and figs from La Baeza, also known for its partridge with cabbage and roast quails. All are sure to tickle the taste buds. 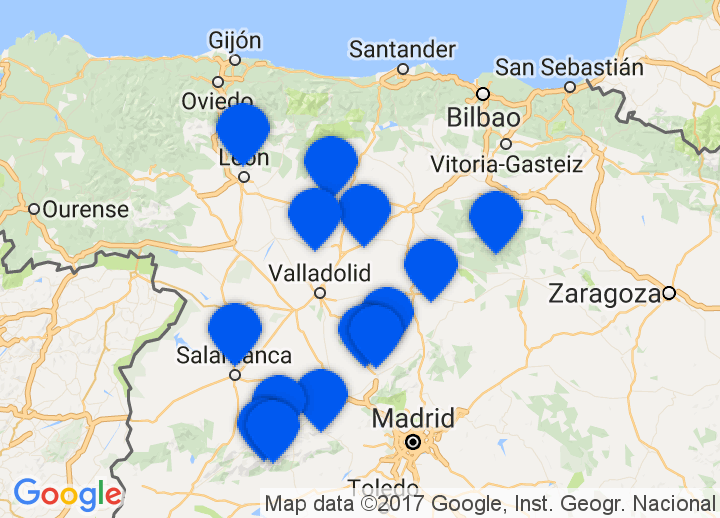