The archipelago of the Canary Islands is made up of seven islands – Gran Canaria, Fuerteventura, Lanzarote, Tenerife, La Palma, Gomera and Hierro, as well as a number of tiny islands. They are a thousand kilometres from the Peninsula and only 115 from Africa.
Being volcanic in origin, their landscapes are pretty different to European or African landscapes many of us are used to. But that makes them no less beautiful or impressive.
The Canaries have been named as the Fortunate Islands – because of the weather – it is spring all year round, with an average temperature of 22ºC. It has more than eight million visitors per year – mainly German and British – 50% of which return for the second time. The water temperature along its 1.500 kilometres coast, though, is not as warm as could be expected because of the Golf current that flows from north to south. 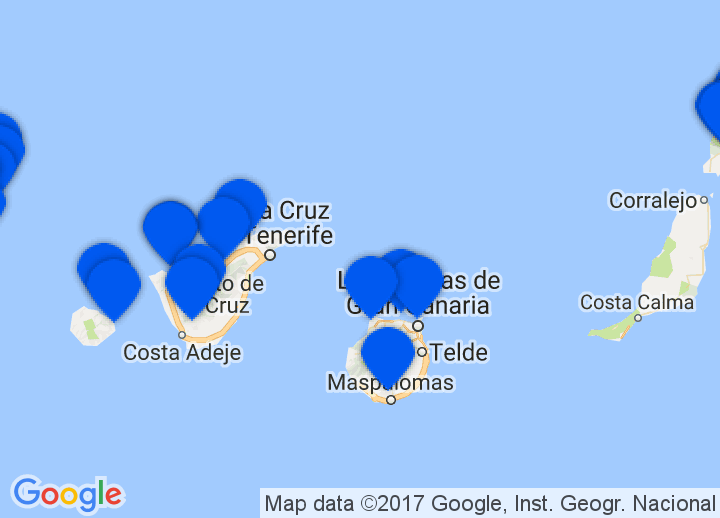 The Canaries, with their temperate climate and surrounding clear turquoise blue waters, offer superb sailing conditions. It is no surprise that a number of great Spanish sailing champions come from these islands.
They are also major volcanic islands. Volcanic activity has spanned over 20 million years. In fact, the islands probably formed above a fixed hot spot and were carried eastward by the Atlantic Plate. Pico de Teide on Tenerife is the third largest volcano on Earth rising up to a peak of 12,188.3 feet (3,715 metres). The most recent eruption was on the northwest flank of the volcano in 1909.
Lanzarote is a shield volcano made of prominent fissure vents and is 20 million years old. Basalts erupted in 1730-1736 and 1824 and cover about one fourth of the surface of the island. La Palma is a stratovolcano and is the largest of the western Canary Islands. It stretches 21,320 ft (6500 m) above the surrounding ocean floor. Hierro is a shield volcano and erupted from the "Volcan de Lomo Negro" in 1793. The eruption lasted about one month and produced lava flows. El Golfo, El Julan, and Las Playas valleys are the result of giant landslides. In Fuerteventura there is proof of eruptions in the last 10,000 years but none have been recorded. Golf The canaries have a number of courses scattered throughout the islands. The range and quality has increased over the past few years, and the weather is, of course, excellent for playing golf all year round.

The majority of flights from continental Europe land in Gran Canaria (Gando airport) or Tenerife (Tenerife Norte or Tenerife Sur airports), though all islands have airports for inter island flights. Flying is an expensive option, however. It is normally cheaper to take the ferry, which sail frequently between the island ports. There are good connections between Tenerife and Gran Canaria. The links between Tenerife and the western islands are also good.